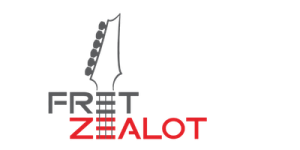 Blerg. Scales. Not as much fun as playing your favorite tune, but they are the fundamental theory behind all music. Instruments are built based on scales and music is created using them whether you know it or not! When you start understanding scales and actually practicing them, you’ll see your guitar skills soar.

If you want some direct help with making learning and playing scales easy to do, check out Trey Xavier’s RelationShapes course on scales on the Fret Zealot app to become a scale master.

In the meantime, here are some tips showing some of our favorite scales and how to play them in fun ways (instead of running your typical drills).

The E Minor Pentatonic is one of the most commonly used scales for playing lead guitar, because any open note (just strumming a string without any fingers on the neck) will give you a note that sounds good! You can see this on Fret Zealot because all the LEDs are lit up on the 0th fret location above. Yes! You’ll still sound decent, even if you hit some extra strings while shredding on those power chords.

Speaking of power chords, we suggest trying the Justin Guitar power chord lesson in the app to learn the simple power chord shapes. Then, open the Notes and Scales section of Fret Zealot and choose the E Minor Pentatonic scale. Practice your power chords on this scale just like the GIF above! You’ll be amazed at how quickly and easily you can play some classic rock rhythms… or make your own!

The E Minor Pentatonic scale is very commonly used in metal and hard rock. Some songs you might recognize that make heavy use of this scale:

Aside from being incredibly useful, this scale is based on a simple 5 note pattern, which means it’s easy to use and adapt when you’re soloing or just playing around! There’s an amazing course by John Robson in the Fret Zealot app (Play Lead Guitar… the Easy Way!) that teaches the shapes and soloing techniques for pentatonic scales specifically, and we highly recommend checking it out. Here’s an example of 3 octaves of a pentatonic scale shape from his course:

This simple shape is easy to memorize and can be shifted up and down the fretboard to change your key on the fly. Experiment with different note patterns and you’ll find yourself replicating some of the most famous solos out there!

The A Harmonic Minor scale is a common, but rather unique and exotic sounding scale. It has a combination between a jazzy and Arabic/Egyptian sound, but it actually dates to classical European music from the Baroque era. Bach was particularly a fan of this one. If you’re jamming on A Harmonic Minor, make sure you get out your effects pedal(s) to create some really interesting sounds while playing the same notes.

(again…head to the SONGS section of the app to see this in action!)

So if you’re looking to find something new with a completely unique sound, A Harmonic Minor is the way to go.

Well, blues is in the name, so you know where we’re going with this! We love the C Blues scale. The Blues scale is just a pentatonic scale with one additional note. From a visual perspective, you can easily identify it by having a “three in a row” pattern (see the bluish hue notes in the GIF above).

This scale is quite fun to play with different soloing techniques: skipping notes, sliding, bending, etc. Add in an effects pedal (e.g. distortion) and power chords are game! This is a great scale to use when practicing your improvisation skills. One of our favorite things to do is play a C Blues backing track with Fret Zealot displaying the scale so you can practice lead guitar.

Want to get into some 12 bar blues, techniques, and turnarounds? Henry Olsen’s Beginner Blues Guitar course in the Fret Zealot app walks you through everything, including some play along tracks to let you experiment on your own.

The G Major Ionian is a staple of many famous guitarists! It’s arguably the most common key that music is played in (followed by C major). Van Morrison’s Brown Eyed Girl is an example of an entire song based on a unique string of notes in this scale. We found this convenient Spotify Playlist that has 40 examples of songs that use G Major Ionian from pretty much every genre.

That’s how we keep ourselves playing and learning scales on the regular. But remember that you can get some extra help with learning your scales. Check out Trey Xavier’s RelationShapes course in the Fret Zealot app. He’ll get you soloing and transformed into a scale master in no time!

Many other courses have smaller sections on scales as well, so subscribe to learn specifically how to play scales through rock, rockabilly, jazz, and blues styles!

Check out the COURSES section of the Fret Zealot app and see for yourself!