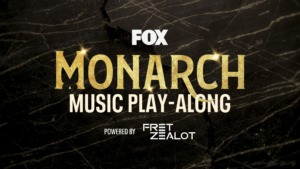 Interactive Guitar Education System to Feature Original Songs from Upcoming Drama, Beginning with Today’s Release of “The Card You Gamble”

Fret Zealot will unveil its first MONARCH song lesson today to coincide with the release of “The Card You Gamble,” written by Hillary Lee Lindsey, Lori McKenna and Liz Rose. Throughout the series’ inaugural season, Fret Zealot will unveil additional lessons of select songs from the show, including those specifically written for MONARCH and cover versions of other artists’ work.

The official MONARCH play-along to learn songs from the series is available via the Fret Zealot app for Android, iOS and on Chrome web browsers as part of an all-access subscription for $14.99 per month. MONARCH fans who subscribe to the service will receive the first month free of charge by signing up at fretzealot.com/monarch and receive $20 off any Fret Zealot LED system purchase, using the promo code “MONARCH.”

MONARCH is a Texas-sized, multi-generational musical drama about the Romans, a powerful family that rules the country music industry. The series, 100% owned by FOX Entertainment, will debut with a special two-night event beginning Sunday, Jan. 30, immediately following the NFC CHAMPIONSHIP, and continuing on Tuesday, Feb. 1 (9:00-10:00 PM ET/PT).

“Interactivity is an important tool to attract and engage with fans; and Fret Zealot’s popular guitar lesson system is a perfect way to promote MONARCH and the amazing music that will be featured throughout the series,” said Laura Caraccioli, Senior Vice President, Head of Strategic Creative Partnerships, of FOX Entertainment.

Zealot Interactive CEO Shaun Masavage added, “Our data and research show budding guitarists learn five times faster with the Fret Zealot system. The combination of streaming video and LED technologies help them play the songs they like sooner and increases their desire to keep learning guitar.  In addition to the songs from MONARCH, Fret Zealot users have access to over 3,000 video lessons.”

In MONARCH, the Romans are headed by the insanely talented, but tough as nails Queen of Country Music DOTTIE CANTRELL ROMAN (Sarandon). Along with her beloved husband, ALBIE (Adkins), Dottie has created a country music dynasty. But even though the Roman name is synonymous with authenticity, the very foundation of their success is a lie. And when their reign as country royalty is put in jeopardy, heir to the crown NICOLETTE “NICKY” ROMAN (Friel) will stop at nothing to protect her family’s legacy, while ensuring her own quest for stardom.